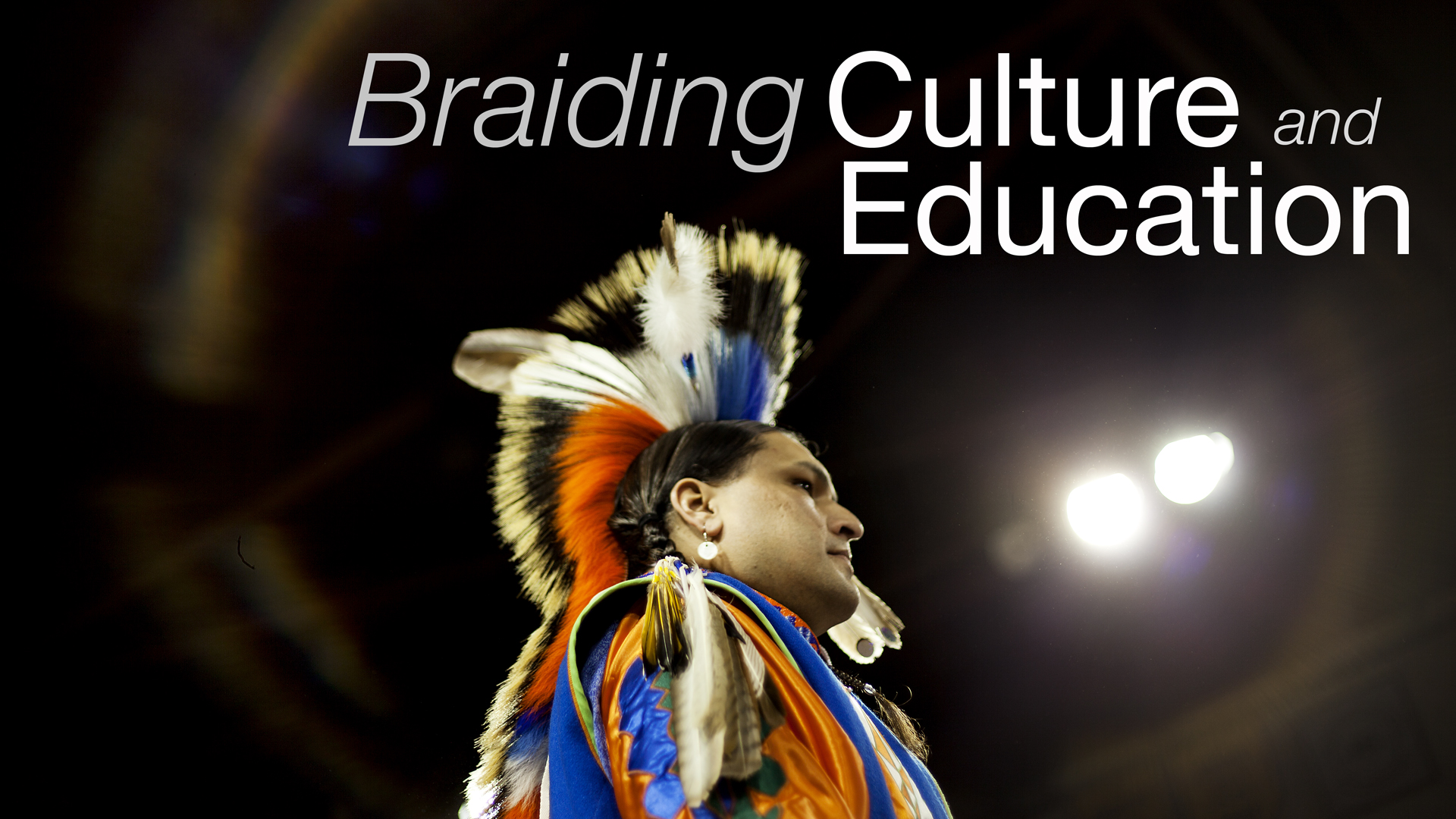 By Sean Bradley and Logan Patmon

Flags of Native American tribal nations, the United States, Canada and Michigan faced outward from behind the stage at the 24th annual powwow Saturday, March 24.

Dancers from grade-school age to the elderly, performing a rhythmic step and adorned in traditional regalia, trail veterans of America's wars, from Vietnam to the second Iraq War.

Mount Pleasant resident and Saginaw Chippewa Indian Tribe of Michigan  member Littleman Quintero said the music unites natives and non-natives, many from the Midwest region of the United States and Canada, for a common cause.

Quintero said the music, from the beating of the drum to the high-pitched chanting, has a meaning.

According to long-time singer R.J. Smith of Mount Pleasant, all songs are composed with specific melodies that embody the spirit of the dance form for which they are written.

There are 224 Native American students enrolled at Central Michigan University for the spring 2013 semester, comprising only 1 percent of the total student population this semester, roaming the halls and occupying the classrooms.

Kasey McCullough and Kristopher Anderson are two of those students.

McCullough, a Native American of the Upper Peninsula's Hannahville Pottawatomie Indian Community, came to CMU with a large educational chip on her shoulder.

“I graduated with 10 students,” McCullough said. “I'm the only one who went to a university.”

Growing up, McCullough and her fellow students were not pushed to get an education by the tribe, family or friends, she said.

“They don't have the funding for classes like Advance Placement classes,” she said. “We had the bare minimum. We didn't have those extra classes.”

McCullough had to catch up with the rest of her classmates academically.

“My first semester here, I failed,” she said. “I got a D in Psychology. It was really basic stuff. I had never seen that before.”

Growing up on the reservation, not only was an academic education elusive but so was a social one.

“There's not a ton of different races in the U.P.,” she said. “I grew up with minority people. I didn't have any white friends growing up.”

The first people she befriended at CMU were either black or Hispanic.

“I could relate to people of a different ethnicity,” she said.

McCullough is now a senior and on her way to graduating from CMU.

Lansing native and junior Kristopher Anderson, a member of the Grand Traverse Bay Band of Ottawa and Chippewa Indians, came to CMU to escape the city atmosphere.

“I don't feel like I was prepared for college,” Anderson said. “When I got here, it was a bit of culture shock.”

Native American Programs helped him adjust to life at CMU.

“I've worked with the tribe and balancing being a college student and learning about my culture,” Anderson said.

Singing for a year and dancing for nearly eight years, he uses the opportunity to educate natives and non-natives alike.

“We do demonstrations for classes,” he said. “Culturally, it's educating me more. And we're educating people and telling them that we're not extinct.”

Early in his time at CMU, Anderson isolated himself from his fellow students but now educates them through singing and dancing.

“My first year, I was basically a hermit crab,” he said. “I stayed in my dorm room.”

Anderson joined campus groups such as the CMU Three Fires American Indian Science and Engineering Society (AISES) and the CMU North American Indigenous Student Organization (NAISO) and is a part of the  Committee.

“Friends will do it jokingly,” he said. “They'll say I'm spoiled because of the tuition waiver and per capita checks and tell me that I get everything handed to me.”

He said he stopped using the Michigan Indian Tuition Waiver this school year, wanting to see what it was like to not use the waiver.

The Michigan Indian Tuition Waiver requires applicants to be enrolled at a Michigan public college or university, to have a one-fourth Native American blood certified by a Tribal Enrollment Department, be a member of a U.S. federally recognized tribe and be a legal resident of the state of Michigan for no less than 12 consecutive months.

For the spring 2013 semester the Michigan Indian Tuition Waiver, overseen by the Michigan Department of Civil Rights, is being utilized by 148 Native American students at Central Michigan University, amounting to $969,353, Maggie Polly said.

Polly, the Assistant Director at the Office of Scholarships and Financial Aid, said the money for the waiver comes from the budget of CMU.

“We're required to offer it based on the state's mandate but it is our money,” she said.

Colleen Green, Director of Native American Programs and Director of the Student Transition and Enrichment Program at CMU, said she informs prospective students of the waiver when giving campus tours.

“A lot of kids won't know about it in high school because their counselors aren't given the information,” Green said. “They're not used to going out and finding it.” 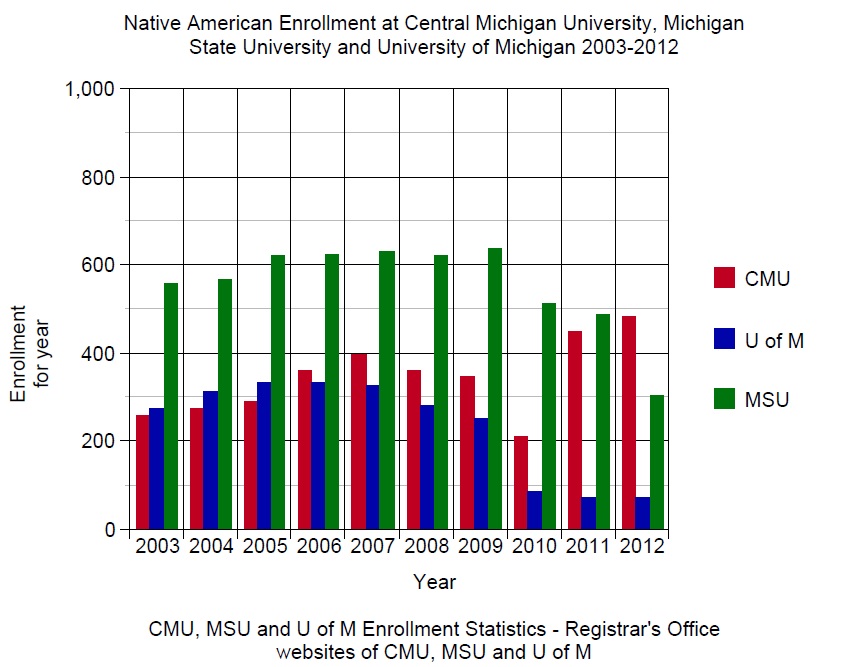 Although the Michigan Indian Tuition Waiver provides Native American students with a greater opportunity to attend college, enrollment has fluctuated over the past decade.

Enrollment statistics of Native Americans attending CMU, Michigan State University and the University of Michigan from 2003 to 2012 were obtained from the respective websites of the registrar offices of each university.

A lower cost alternative for many Native American students is to go to a tribal college located on or near a reservation.

“All tribal colleges have to meet a certain (enrollment) requirement,” Green said. “They have to have 51 percent native population. If it starts to lower, they lose their tribal college status.”

The Saginaw Chippewa Tribal College in Mount Pleasant, 2247 Enterprise Drive, has smaller class sizes (no more than 25 students) and lower credit hour rates than other community colleges or large universities.

“More native women are in college than native men,” Green said. “The tribal college picks up a lot of students. Some tribal colleges have four-year degrees.” 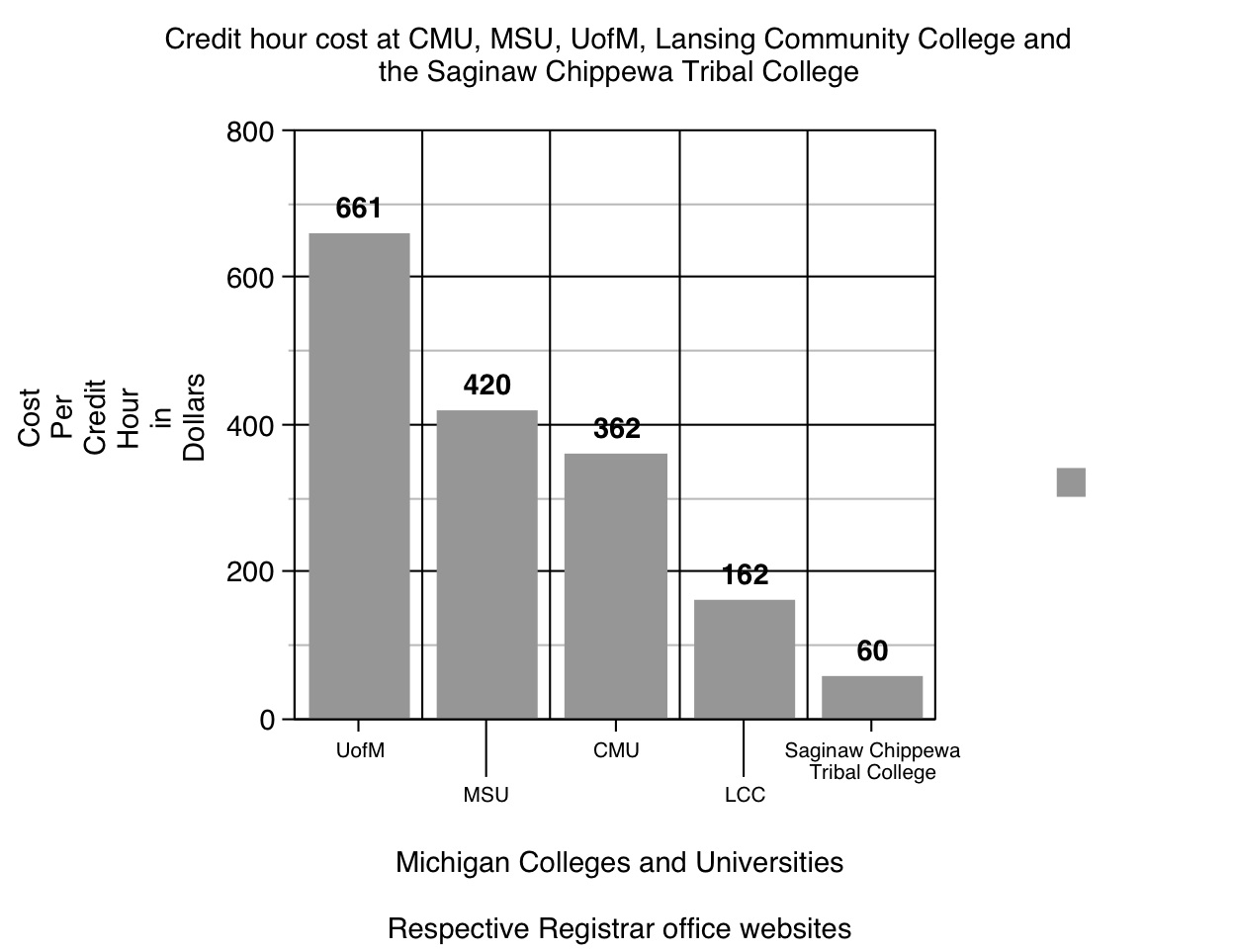 Once a year, CMU hosts a powwow to educate the greater Mount Pleasant community about Native American culture.

Held at McGuirk Arena over a two-day period, this year's powwow was attended by over 2,200 people.

Carol Corbiere, of the Manitoulin district of Ontario, Canada's M'Chigeeng First Nation Ojibwe tribe, came to the powwow dressed in a red regalia, adorned with fake elk teeth, a shaw, black suede boots, among other things.

She dances and prays with everything she has.

“Dance hard,” she said. “When you dance hard, you're praying hard. It's not just a dance.”

Corbiere comes to powwows like this to dance, drum and sing, showing pride in her culture

She said education and culture don't have to be separate.

“You can still follow your traditional ways and customs and still get an education,” she said. “It's absolutely vital.”